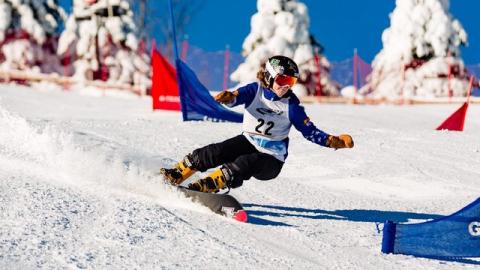 Reading Area Community College student Kaiya Kizuka became the U.S. champion in the parallel slalom Tuesday by being the highest placed American in the event at the FIS World Snowboard Championships in Park City, Utah.

The event is the highest level of snowboarding competition during a non-Olympic year.
Kizuka trains with Ski Roundtop Race Club in Lewisberry, PA and competes in the Open Class level at national and international FIS events as she tries to secure a spot on the World Cup circuit and qualify for the 2022 Winter Olympics.

During the 2017/2018 snowboard season Kaiya competed nationally in the NorAm “Race to the Cup” snowboard series. At the end of the season she had earned enough FIS points to be ranked among the top junior women open class athletes in the United States.

She has been a member of the U.S. Junior World team the last two years.