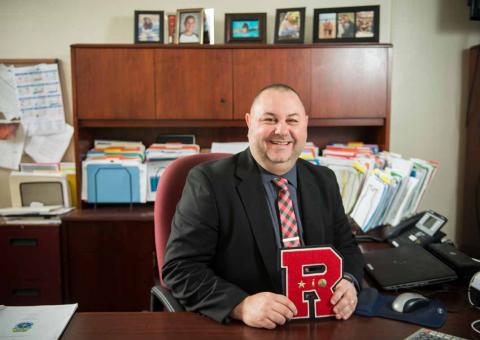 Chris Celmer started his Reading Area Community College (RACC) journey as a student, but RACC provided him with much more than an associate's degree. "Going to RACC was the best decision I ever made," explains Celmer. "It was a turning point in my life and put me on track for long term success," says Chris.

Chris was drawn to RACC for the economic perspective and the ease of being able to juggle his full-time job and course load. He enrolled in RACC as a Business Management major. He continued his education at Alvernia University, where he obtained his bachelor's degree in Business Administration and later got his master's degree at Wilkes University. Chris credits RACC for laying the groundwork for his success. He says, "The foundation that I was given at RACC in the business division allowed me to have a successful journey in school and in the working world."

While working in a prospering manufacturing position, Chris was given the opportunity to teach an adult education course at RACC. Teaching the program helped him to transition his career to work full-time in education. "I realized that education was going to be my gateway to attaining my career goals, and RACC is where I found my passion for leadership and for education," he says. Chris segued to a position at the Berks County Intermediate Unit, which ultimately led him to where he is today, Assistant Superintendent at Reading School District.

Chris attributes his success to the guidance he received from professors Dr. Sandy Kern and Mary Lou Kline. At RACC, both Sandy and Mary Lou were his go-to professors not only for guidance in his studies, but also for counsel with his career.

"I wouldn't be where I am today without the two of them," he asserts. "They both had a phenomenal impact on my life." Chris stayed in contact with Dr. Kern while on a Programming Advisory Board in the Business Division at RACC. And recently, Dr. Kern asked Chris to teach an Operation Management course. "To keep in contact with Sandy over the years has been a real blessing, and now being able to come back to RACC to teach under her is very exciting," he says.

As an administrator in the public school system, Chris feels that RACC is a phenomenal option for students. He believes the bigger universities lack the personal interaction that RACC offers. "The faculty and staff want to do what's right by their students, especially those coming out of high school that need more guidance and support," he says. Chris's recommendation to attend RACC comes both professionally and personally, since his daughter Rayanna is starting classes in the Early Childhood program next year. "I would absolutely recommend RACC to anyone if they are looking at furthering their education."

Addressing a 16-year-high in global talent shortages, a new seamless path from associate to master’s degree